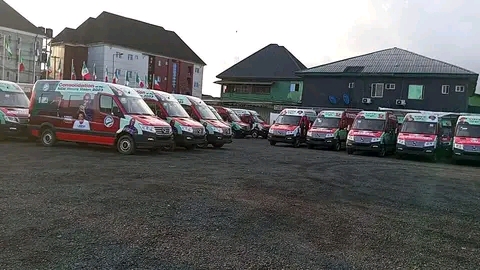 Rivers State Governor, Nyesom Wike has reacted to a statement by Gov. Samuel Ortom of Benue state that he donated 25 buses to the People’s Democratic Party in the state.

Ortom, had during a stakeholders meeting in Benue revealed that his Rivers State counterpart donated the buses to them for campaigns.

However, Wike while speaking to members of the party in Benue at the weekend said the statement by Ortom was not correct.

According to him, the buses are part of the many vehicles his team acquired for his presidential campaigns if he had won the primary.

Wike stated that since he did not sail through, the team decided to share the vehicles among those who supported him.

“So, Ortom saying I gave you people vehicles, it is not correct. They are the vehicles that our team bought that time because of the (presidential primary) election, we would have won it, but to God be the glory,” he said.

Governor Wike also said they were in Benue State to support Governor Ortom.

Gov. Wike alongside Dr. Okezie Ikpeazu of Abia, Seyi Makinde of Oyo and Ifeanyi Ugwuanyi of Enugu State are currently in Benue state to inaugurate the PDP campaign council.