Governor Nyesom Wike has warned that politicians and traditional rulers who fail to wear face masks will be used as example in the state.

Wike made this known  during a meeting with traditional rulers in the state at Government House Port Harcourt today. He said anyone of them who fails to comply with the directive of the state government will be arrested and prosecuted.

Governor Wike, urged the traditional rulers to inaugurate a task force to ensure total compliance with the lockdown in their various communities. He appealed to them to support his administration in the fight against the pandemic.

Chairman of the Rivers State Council of Traditional Rulers and King of Opobo, Dandison Jaja commended the governor for involving them in the fight against the COVID-19. The monarch who assured Wike of the council’s total support to defeat COVID-19 in the state, commended him for proactive measures taken so far. 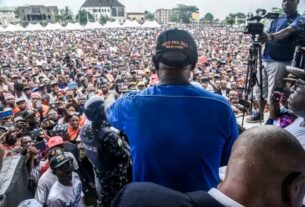