Omega Power Ministries has named its newly built skill acquisition centre at Aluu in Ikwerre LGA, for repentant cultists and sex workers after the Governor of Rivers State, Nyesom Wike.

The centre which was commissioned yesterday, by the Rivers State Governor, represented by his Chief of Staff, Emeka Woke had other clergymen and politicians in attendance.

Emeka Woke during the commissioning stated that the Wike led administration will continue to partner with organisations that are committed to youth empowerment. He noted that efficient social services and critical infrastructure are being provided by the government for the people.

The Chief of Staff commended the General Overseer for the good works he has been doing for the state, while calling on other faith based organizations to emulate the good works of the Apostle.

Apostle Chibuzor in his remarks said he decided to open the acquisition centre, to teach the repentant cultists and sex workers skills to help them take care of themselves and their families. He equally pointed out that it was done to deter them from going back to crime. 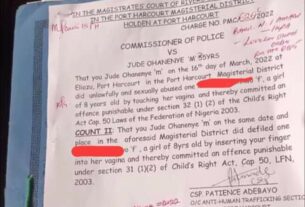