Manager of the demolished Prodest Hotel, Dr. Bariledum Azoroh has been released from the state Isolation centre in Port Harcourt.
The manager has now reunited with his family, friends and associates.

According to reports, Dr. Bariledum was declared fit by doctors to leave on Saturday, but was stopped from doing so by the state Ministry of Justice. He was finally allowed to go home yesterday, Monday June 8 2020. This was after the necessary documentation by the state government.

The State’s Attorney General had  said Dr. Azoroh can only be allowed to leave after the completion of all Court Processes. He noted that it was the court that remanded the manager and not doctors at the isolation centre.

Dr. Azoroh was convicted by the court for violating the directive of the state government. It was later announced by the government that he had tested positive for the COVID-19. A claim the manager denied. 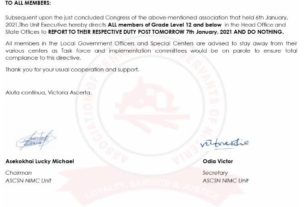