The State Executive Committee(SEC) of the All Progressives Congress(APC) in Rivers State has suspended the Acting Chairman of the party in the state, Hon. Igo Aguma.

The SEC has also disowned the suspension of Victor Giadom as member of the National Executive Committee of the APC, and the swearing-in of Hon. Wogu Boms to replace Giadom as National Deputy Secretary of the party.

Addressing newsmen in Port Harcourt, Sen. Andrew Uchendu noted that the suspension of Aguma was based on alleged anti-party activities.

Uchendu, however, announced that the SEC after its emergency meeting attended by 28 out of 38 members appointed Mr. Sokonte Davies, to Chair the party in acting capacity. 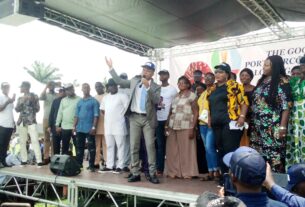