The Rivers State Commissioner of Police, Usman Dan Daura has said that the Police is searching for three members of a kidnapping syndicate dislodged at Ogu-Bolo in the state on Sunday.

Dan Daura at a media briefing in Government House Port Harcourt yesterday said, Naakpo, a notorious kidnapper and his gang members, were ambushed at a forest in Ogu-Bolo in Rivers State, by officers of the anti-kidnapping unit.  Naakpo, who is the leader, was shot dead while the other members of the gang escaped.

The commissioner who said live ammunitions and cash were recovered from the kidnappers, promised to investigate where and how they got the riffles.  He assured the public that the Police will stop at nothing to ensure criminals in the state are brought to book.  The gang have been terrorizing the East-West axis of the Ogoni-Uyo Road.

Meanwhile, the Governor of Rivers State Nyesom Wike in his reaction commended officers of the Rivers State Police command for killing the notorious kidnapper and dislodging other members of the gang.

Wike stated that his government will continue to support the Police in every way possible to ensure the protection of lives and properties in the state. He charged the commissioner and his officers to intensify efforts at ensuring the state is rid of all criminal elements. 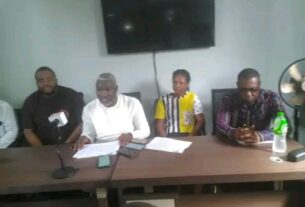