The immediate past publicity secretary of the APC and chieftain of the party, Chris Finebone, has reacted to the statement by OCJ Okocha SAN, supporting the actions of Gov. Wike in the state.

Fine bone in a statement yesterday said it is regrettable that Okocha, an elder statesman will defend Wike’s actions, at a time other Senior Advocates in the country have come out to criticise the despeakable actions of the Governor. This is for demolishing two hotels in the state at Eleme and Onne.

Meanwhile Sen. Magnus Abe has equally condemned Wike’s actions saying they are draconian. Abe in a statement, urged the governor to give his measures in fighting the COVID-19, a human face. This is so, it doesn’t prove counter productive.

Also, the gubernatorial candidate of the AAC in the last governorship elections in the state, Biokpomabo Awara has said Wike should have used the hotels as isolation centres instead of demolishing them. 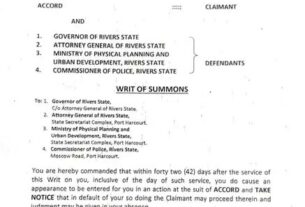 E-learning: Rector frowns at non-payment of fees by Students